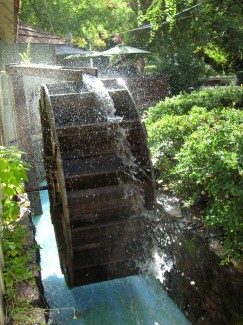 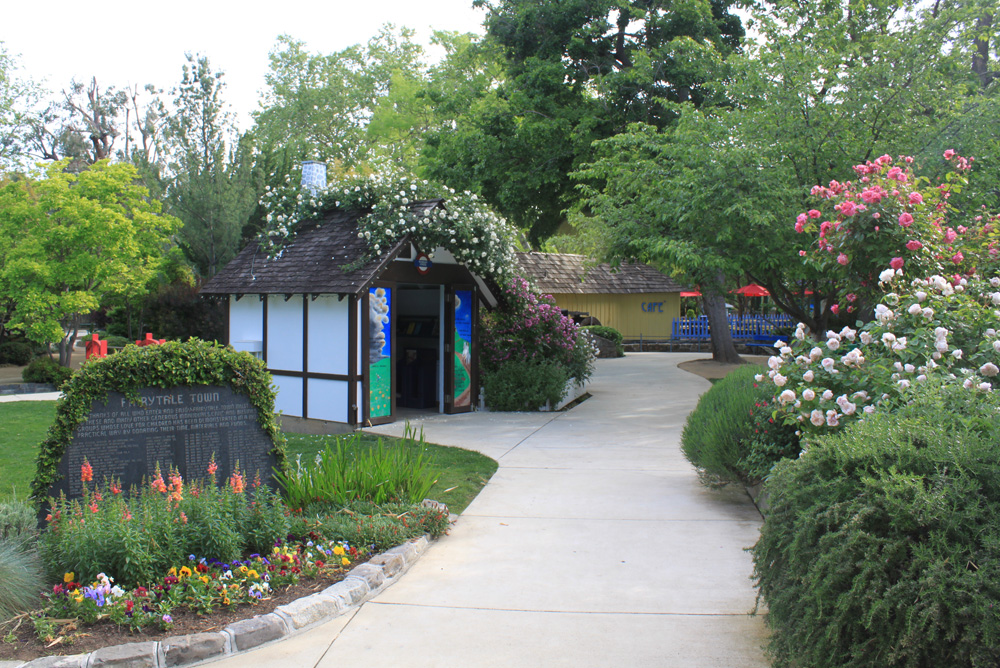 A last-minute snack shack for travelers in need, the Station also offers a souvenir penny machine. 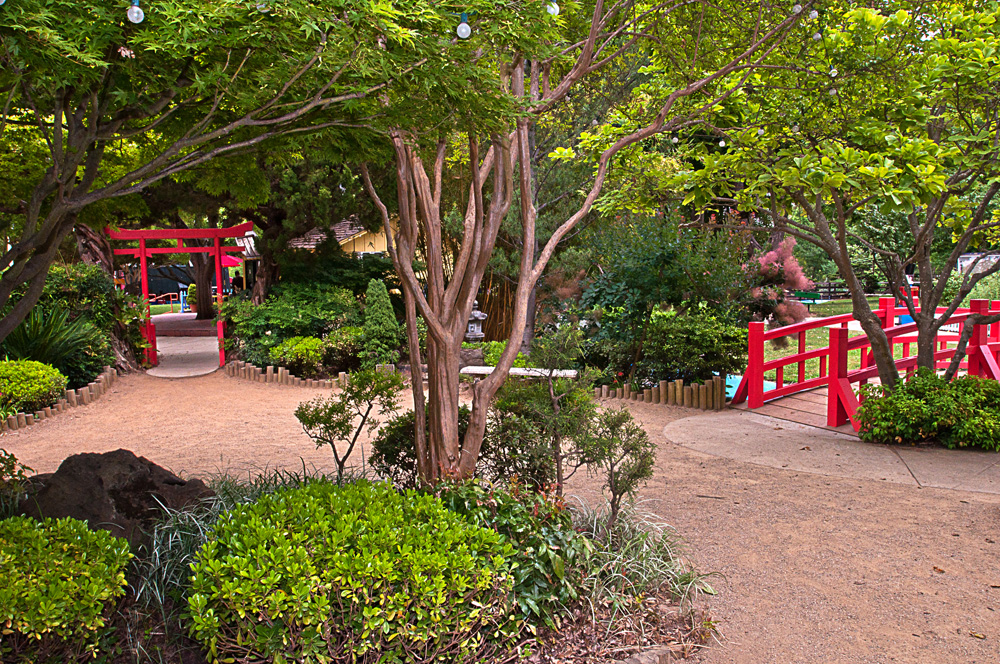 The Japanese Garden at Fairytale Town was first installed in 1961. The centerpiece of the garden is a statue of Urashima Taro – the Fisherman and the Turtle. This ancient tale features a noble young fisherman who is rewarded for rescuing a turtle by being taken to a fabulous undersea kingdom where he lives for many years in the company of a beautiful princess.

Largely sponsored by the Senator Lions Club and other generous community members, the Japanese Garden has been rejuvenated with new architecture and landscaping, and will continue to foster the tranquil theme of its predecessor, with elements such as a waterfall pond, an open area surrounded with beautiful landscaping, Asian-inspired plantings and stone garden architecture and benches.

This garden is home to a variety of plants often featured in Asian gardening, including a Magnolia soleangeana, a breathtaking early-spring bloomer with fragrant cream and pink flowers. Cherry trees blossom in spring as well, and ginkos provide lush green shade in the summer. Their golden leaves float in the pond in the fall, a bright contrast to the deep reds of eight Japanese maples situated throughout the garden. The central feature of the garden is a forty-five-year-old mature maple. White Japanese anemones bloom in early fall against a backdrop of bamboo. Four species of bamboo frame the perimeter of the garden. In addition to traditional Asian plantings of camellias and azaleas, miniature conifers have been added.

Another recent acquisition to the garden completes the traditional Asian “Three Friends of Winter” plants. These “Friends of Winter” flourish even in the coldest months, with the plum tree blooming so early in spring it often blooms in the snow. The other two “friends” are bamboo and pine, both evergreens. The garden is not only a place of beauty and reflection, but also a place to learn for small Fairytale Town guests. A variety of arts, crafts and gardening projects take place in the garden year round. 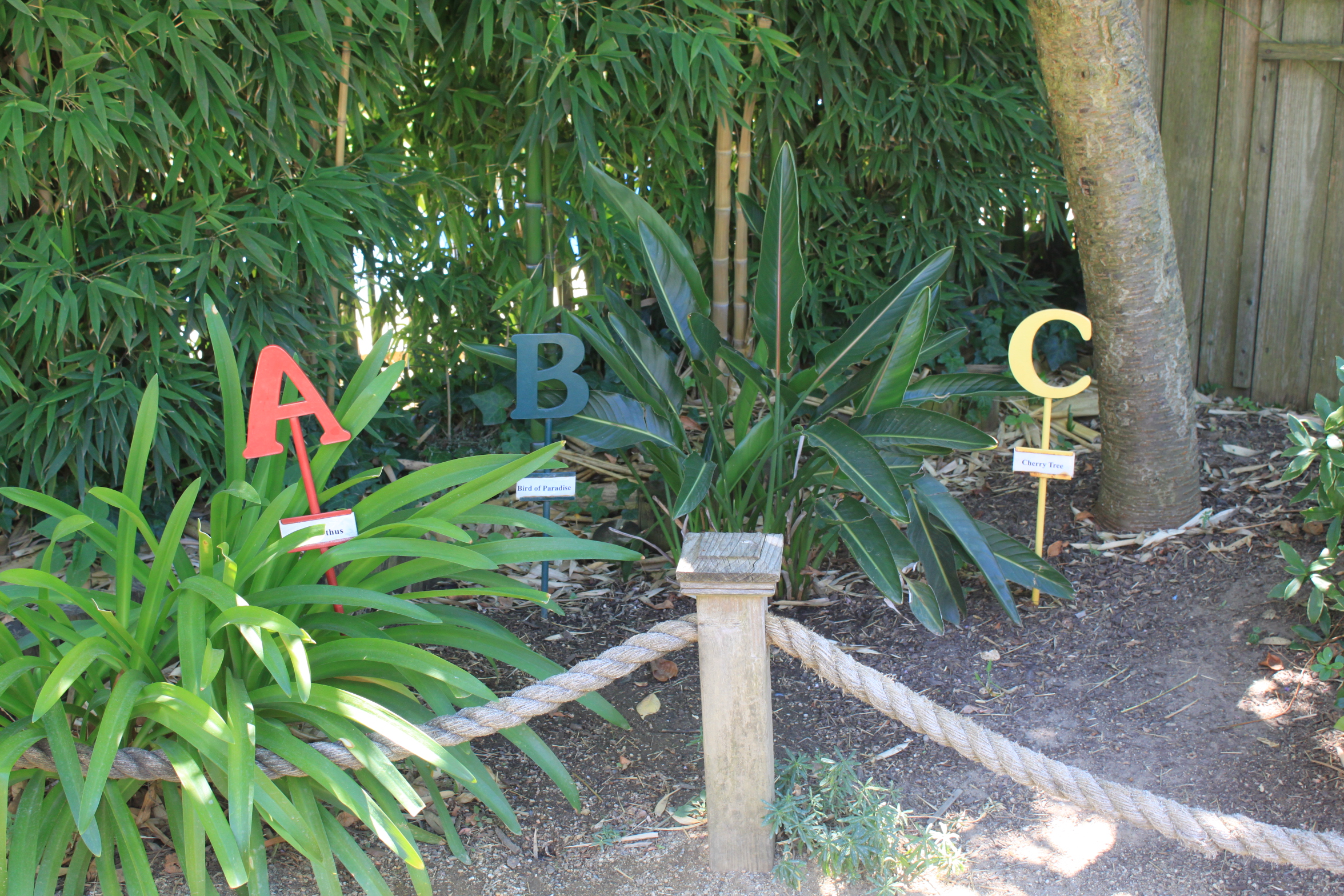 Planted in the summer of 2000, the Alphabet Garden at Fairytale Town is a perennial source of pleasure and discovery for families. This garden gives plants and flowers the power to teach literacy to Fairytale Town’s guests: each letter of the alphabet is flanked by plants that start with that letter in a changing seasonal display. Children can view grasses, perennial and annual flowers and several trees in this L-shaped garden. Children can also water the plants in the Alphabet Garden.

This rustic garden brings Beatrix Potter’s beloved Tale of Peter Rabbit to life at Fairytale Town. Featuring an arbor-shaded, gated workshop area, the garden is a frequent location for hands-on learning workshops at Fairytale Town. Up to 40,000 school children visit each year to learn about seed germination, worm composting, nutrition, and basic gardening skills in our workshops for school groups.

The garden adjacent to the workshop area features raised beds of seasonal vegetables, fruits and flowers, with trellised vines in the center of several beds. Children can often discover tomatoes, eggplants, artichokes, beans, squash, and other vegetables growing in these beds.

Bordering the workshop area is a small herb garden featuring chives, lavender, rosemary, mint and thyme. Children are encouraged to identify each herb with signs mounted in this garden. Annual herbs and flowers are often added to this bed.

Children can also water the garden with child-sized watering cans. Children are encouraged to find water droplet signs throughout the garden in dry beds where water is needed most. Sometimes our plants have plenty of water, so the watering cans will be put away. 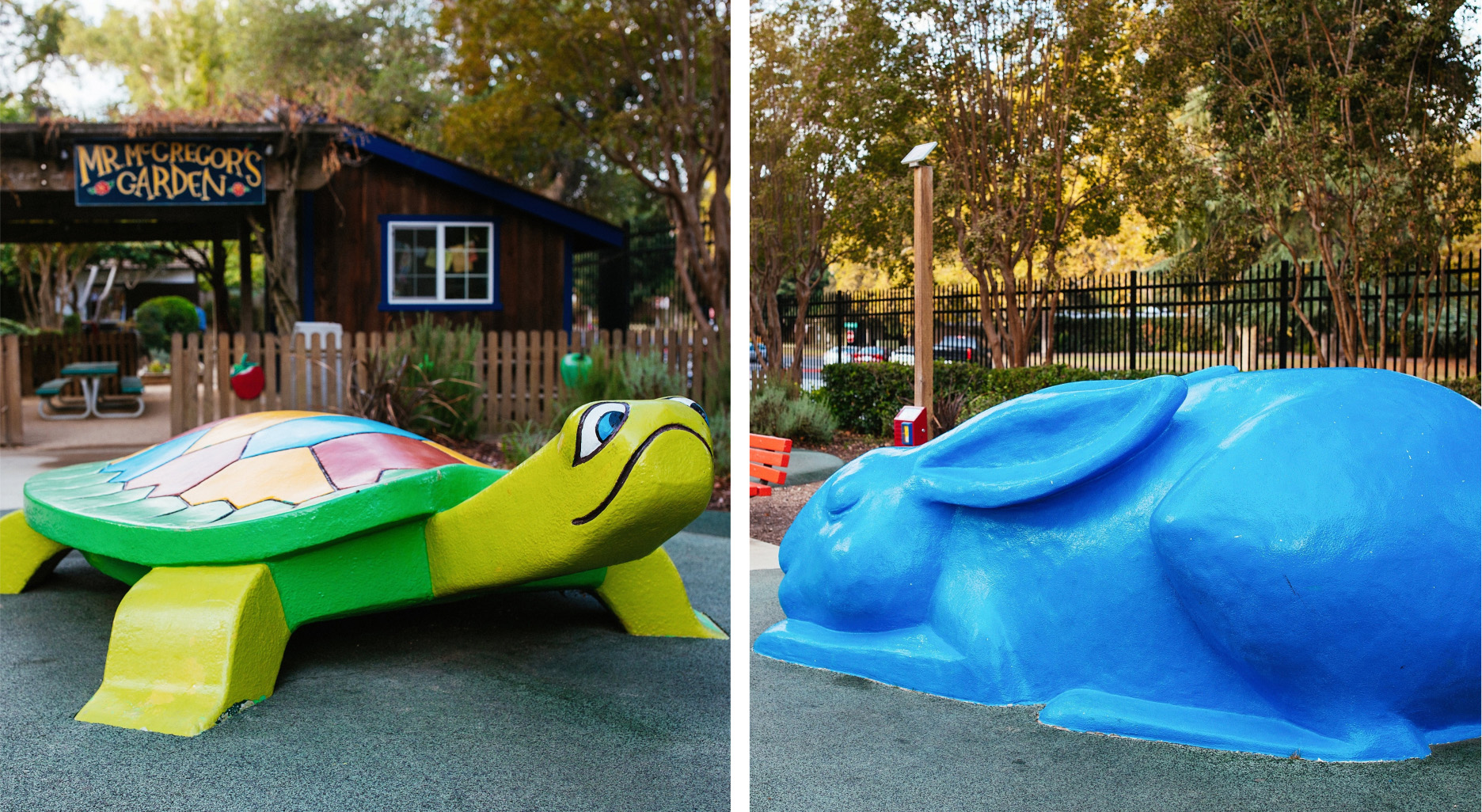 The lesson of slow and steady wins the race is represented by the larger-than-life slow poke of a tortoise and his lightning-quick pal, the blue hare.

See Photos from the Slow and Steady Photo Contest

Having successfully evaded Mr. McGregor, Peter, Flopsy, Mopsy and Cottontail live in splendor at Fairytale Town. Beatrix Potter’s beloved tale of a misbehaving boy rabbit and his good little sisters has a permanent home next to the Children’s Theater.

New Home for Peter Rabbit and His Sisters

Thanks to the support of a generous donor, we were able to completely transform and improve the home of Peter Rabbit and his sisters. Two changes immediately stand out: a new fence and larger home. We were able to move from a double fence with a high profile to a single fence that is three-feet shorter, making it easier for guests to see the rabbits at play. The new home is three-times larger and includes several improved features such as a new air conditioning system, plenty of windows, and a suspended flooring system. The Tudor-style home and picket fence were inspired by the original drawings from Beatrix Potter’s classic tales. The enclosure also features a miniature Mr. McGregor’s Garden, where Animal Keepers can grow vegetables for the rabbits to enjoy. Our heartfelt thanks go to the Griffiths Family for making the rabbits’ home a reality. Thanks also go to Berry Lumber for their generous donation of redwood. 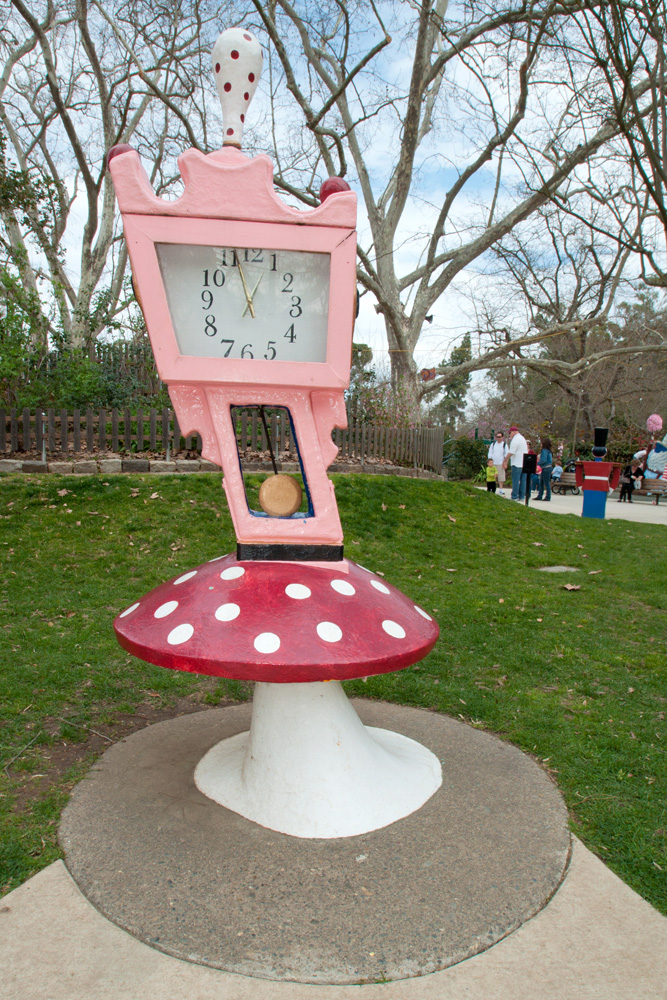 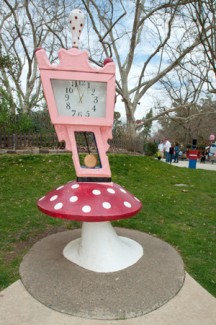 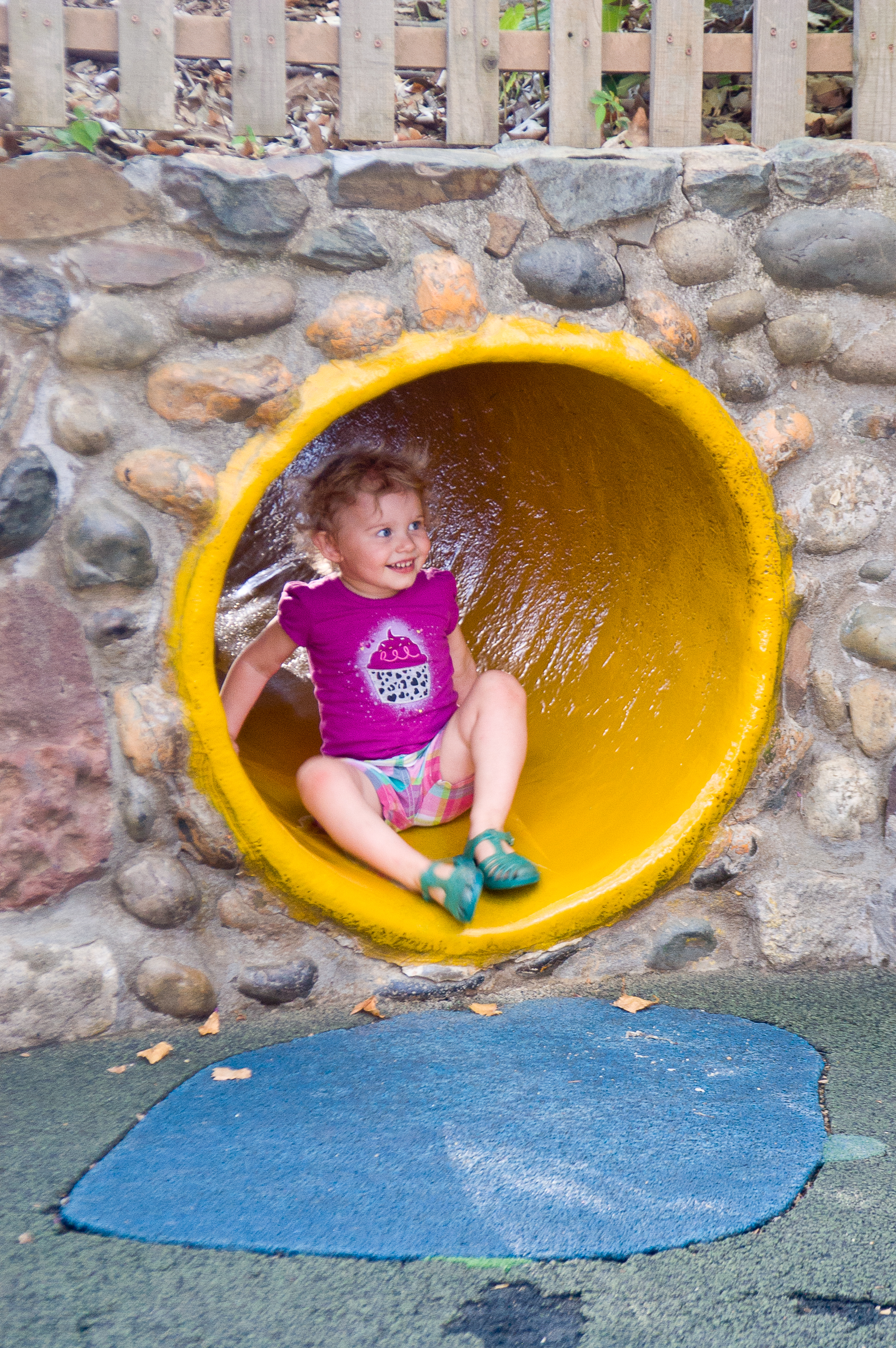 The Cheshire Cat occasionally makes an appearance directly above this slide into Wonderland.

Our indoor Children’s Theater plays host to a variety of productions for children and families throughout the year, including the Puppet Shows for school groups held every Spring. One of the few indoor spaces in the park, the Children’s Theater is also used for many of our summer FunCamps and educational programs, as well as being the primary rehearsal and performance venue for the SPARK Theater Program and Fairytale Town Troupers.