The seat of royal birthday parties at the Round Table of legend, this is one of the original structures at Fairytale Town. It features a maze-like entrance, vibrant murals of Queen Guinevere, King Arthur's Guards and Merlin the Magician.

Two beautiful Southdown sheep live in the schoolhouse where Mary brought her lamb one day.

The Old Woman in the Shoe*

The fastest, tallest slide at Fairytale Town, an iconic landmark of the park for decades.

The number-one, all-time favorite set of park visitors, this winding path provides a tenth of a mile of exercise and fun.

Climb to the top of the tree house, home to Pooh’s wisest friend, then take an exhilarating ride down the corkscrew slide.

The home of the Little Red Hen House, Charlotte the Spider, Maddie, the Cow that Jumped Over the Moon, and Eeyore the Donkey, and Templeton the rat.

Imagination propels this giant tractor next to Farmer Brown’s Barn.

Take a romp through Robin Hood's own playground. A favorite venue for birthday parties that also features a large climbing fort for your own little Merry Men.

The brick house that withstood the wolf’s huffing and puffing is now home to three Kunekune, pronounced “KOO-KNEE, KOO-KNEE” pigs.

Two Nigerian Dwarfs Goats and one Pygmy Goat—bring this tale of bravery and family solidarity to life.

Flanked by towering stacks of storybooks, the Mother Goose Stage is home to some of the most imaginative performances you'll ever see - including the impromptu escapades of our guests!

This slice of Swiss cheese is a favorite climbing spot and photo backdrop.

A trip to the top of this hill reveals a real working water well and a slide for tumbling after.

From a distance, she appears to be a statue of this beloved nursery rhyme character, but closer examination reveals an innovative slide built into her voluminous apron.

Jack and the Beanstalk*

Built in 1997, this set features a giant beanstalk slide and what is certainly the largest foot in the Sacramento area.

With a team of carousel horses, the pumpkin coach transports the imaginations of young and old.

The Little Engine that Could*

Feel the power of positive thinking aboard this engine where anyone can become the engineer or just go along for the ride.

Theater performances are held throughout the year and are a great way to introduce your children to live theater!

The Cheshire Cat occasionally makes an appearance directly above this slide into Wonderland.

Peter Rabbit and His Sisters*

The Tortoise & the Hare*

The lesson of slow and steady wins the race is represented by the larger-than-life slow poke of a tortoise and his lightning-quick pal, the blue hare.

Peter was captivated by it, and so are birthday party guests and thousands of school children who discover the magic of gardening here each year in this interactive learning garden.

This garden gives plants and flowers the power to teach literacy to Fairytale Town’s guests: each letter of the alphabet is flanked by plants that start with that letter in a changing seasonal display.

A traditional Japanese-style garden based on the ancient fairytale The Fisherman and the Tortoise, featuring authentic stone structures from our sister city, Matsuyama, Japan.

A last-minute snack shack for travelers in need, the Station also offers a souvenir penny machine.

A most curious group of toadstools provide a shady seat next to the water wheel, or the basis for a quick game of balance and hop.

Ahoy, matey! Captain Hook and Peter Pan are just over the next wave.

Make a wish and watch your coin spiral down into the wishing well! All proceeds support nonprofit Fairytale Town.

Deep in the 100 acre wood where Christopher Robin plays you'll find Pooh Corner, the home of the beloved Winnie the Pooh!

Located adjacent to the Pirate Ship, Pirate’s Cove is the site of swashbuckling birthday parties at Fairytale Town.

When you enter Fairytale Town, visit the Box Office to get your admission tickets to the park!

You may see Mary’s Little Lambs’ graze in this enclosed grassy area! This area is also used for up-close introductions with our animal family.

Most people don't know that after the Dish ran away with the Spoon, they opened a little Cafe in Fairytale Town. 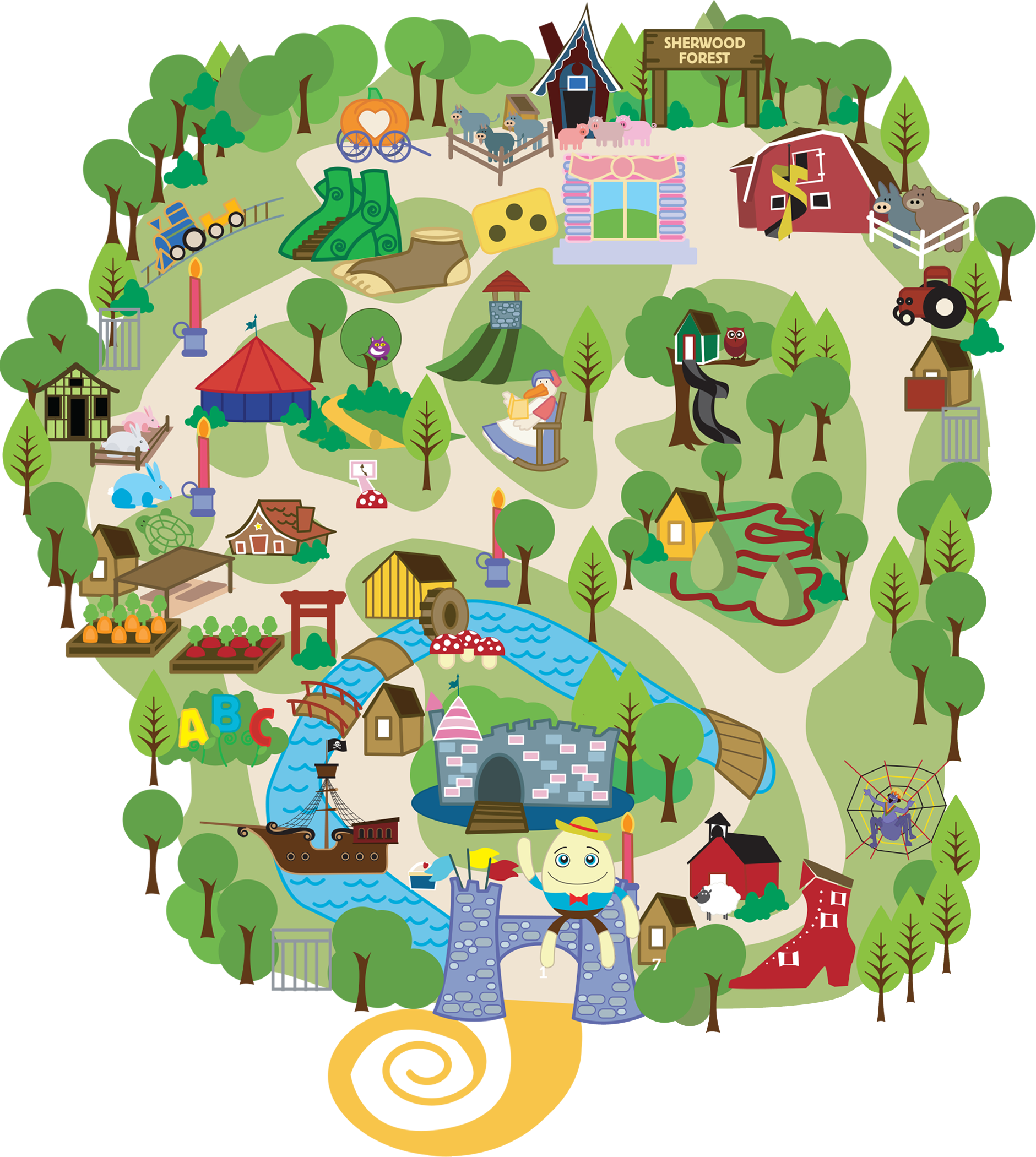 ▲ No lap sliding. Not recommended for children under 3