Five years ago, Steve Antony pursued his dream job as a children’s book author and illustrator. Since then, he’s written and illustrated 16 picture books, including his 2014 award-winning debut The Queen’s Hat, the bestselling Mr. Panda series, and Unplugged. He illustrated Tim Minchin’s When I Grow Up from his hit musical Matilda and illustrated a cover of The Famous Five, Enid Blyton’s popular series. Steve lives in Swindon, England, and is Patron to Swindon Libraries Children’s Services. Steve will read selections from the Mr. Panda series and sign books at Fairytale Town on September 29 and 30 as part of the ScholarShare Children’s Book Festival. 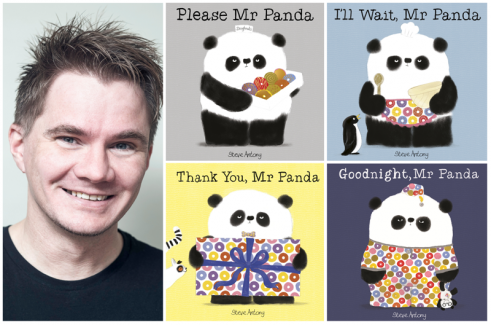 What was your inspiration for Mr. Panda?

The first story, Please, Mr. Panda, came to me in a most peculiar way. One lazy Sunday afternoon I was doodling pandas in bed when I heard a voice inside my head. “Would you like a doughnut?” asked the voice. I imagined this to be the voice of the deadpan Mr. Panda who was staring right at me from my sketchbook. “Give me the pink one,” replied a tiny, squeaky voice, which I imagined to be that of a cute little penguin. “No, you cannot have a doughnut. I have changed my mind,” huffed Mr. Panda. This made me chuckle. But why did Mr. Panda change his mind? I continued to imagine him interacting with other animals in a similar fashion. Then it dawned on me: none of the animals said please! That’s when I knew I had a good story. Mr. Panda wanted to teach me, and the world, a lesson or two in manners.

Mr. Panda is now the star of four picture books and two board books. When you were writing and illustrating the first book, Please Mr. Panda, did you ever imagine that Mr. Panda’s adventures would expand into a series?

The response to the first Mr. Panda book took me by complete surprise, and I just knew Mr. Panda had more stories to tell. I also love adding more black and white animals to Mr. Panda’s expanding circle of friends. I pick only black and white animals for Mr. Panda’s world because I’m red-green color-blind, and at the start of my career I steered clear of using too much color. Now I’m more confident with using color. For example, my illustrations for Tim Minchin’s When I Grow Up are super colorful.

I’ve actually just finished the 5th Mr. Panda picture book. I don’t think I’ll ever get bored of Mr. Panda because he’s such a funny character to develop. He’s grumpy-looking yet really generous. He’s big and gruff yet wears pink frilly aprons. He isn’t perfect, yet he tries his best to teach manners in his own unique (and somewhat unorthodox) way. Plus, he has the best fans. Every now and then I check the hashtag #PleaseMrPanda to see what people are posting on Instagram. One school painted a gigantic Mr. Panda in their class and took turns taking selfies next to it. Another transformed their class into Mr. Panda’s doughnut factory. I often get tagged in Mr. Panda related tweets, too.

Tell us about your role as patron of Swindon Libraries Children’s Services. What do you like best about that role?

Since my first book, The Queen’s Hat, was published, I have developed great friendships with my local librarians. I regularly hold free events in libraries across the Borough of Swindon and meet with librarians to creatively brainstorm new and imaginative ways to inspire children, families, and schools to visit their local branch. It’s a lot of fun. Lots of people can’t afford books. Schools often can’t afford new books, which is why I think the best thing about my role is that I’ve been given this amazing opportunity to share the joy of reading to children who, if not for libraries, would not have access to books. Books are so much more than just ink on paper. They are doorways into amazing worlds where just about anything is possible. This is something I always tell school pupils. You should see their faces when I tell them they hold the key to each and every door.

What was your favorite book to read as a child?

There were so many. I loved poring over picture book illustrations and finding all the hidden details. I particularly enjoyed books by Richard Scarry, but the books I borrowed most from the library were actually the Draw 50 books by Lee J. Ames and Ed Emberley’s “How to Draw” books. To be honest, I actually struggled with reading non-picture books, but I found that comics and graphic novels helped bridge the gap.

Doughnuts are a recurring theme and visual in the Mr. Panda series. Do you like doughnuts, and what’s your favorite?

Unlike Mr. Panda, I do like doughnuts. My favorite is salted caramel. I am cutting down because I’ve probably eaten far too many since the publication of Please, Mr. Panda, although I did eat one yesterday.