Acclaimed author, storyteller, speaker and educator Barbara Jean Hicks has published seven picture books, including Monsters Don’t Eat Broccoli, The Secret Life of Walter Kitty, and the multi-award-wining Jitterbug Jam. Her two most recent titles are A Sister More Like Me and An Amazing Snowman, both commissioned by Disney Studios as tie-ins to their Oscar-winning animated feature film, Frozen. She currently makes her home in Northwest Washington state. Barbara will headline this year’s ScholarShare Children’s Book Festival the weekend of September 24 and 25. She’ll read A Sister More Like Me plus her newest book, Once Upon A Parsnip, and sign copies of her books. 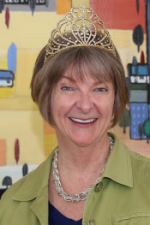 You are known as “The Story Queen”? How did you acquire that title?

Okay, you got me—I crowned myself! Here’s the thing: I’m an introvert. When I realized that being a published author wasn’t just about writing, that it was also about connecting with my audience on a personal level, I had to figure out a way to make that work for me. And putting on a costume did it. When I don my gown and tiara, I’m no longer the one hanging back in a crowd hoping no one will notice me. I’m an actor onstage. The weird thing is that the character I’m playing is actually me. Or at least an aspect of me, one that I’d never expressed before—and one that makes an immediate connection with kids, for whom I am anything but make-believe. I am the Story Queen. (And “queen” only because it rhymes with “Jean”—I could just as easily be “Claire the Story Bear” and dress up in a furry suit, if Claire were my name!) 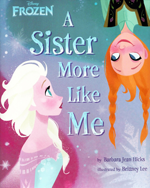 What did you enjoy most about writing A Sister More Like Me, featuring Anna and Elsa from Frozen?

First, I had the wonderful opportunity of seeing an early screening of Frozen, more than a year before the movie was released. It was still in production—no music, not completely animated, pieces of the story not yet fleshed out—but still, I think everyone in the audience knew it was going to be something special.

I also enjoyed the story-building process—thinking about my own two sisters and me, and how we didn’t always understand each other because we were so different from one another. And I thought about how we sometimes depended on one another because of those very differences.

I lost my eldest sister the day before Frozen was released in theaters. I’m sad she never got to see the movie, but glad she was able to hold the finished product in her hands before she died. The book is even more special to me because I associate it with Lindy. The last weekend we spent together, she had arranged for me to read and do a book signing for A Sister More Like Me at her favorite bookstore in Seattle, and many of her friends as well as her daughters, granddaughters and great-granddaughters were there. I have a picture of the two of us at the signing, me decked out in my royal finery, Lindy standing behind me with her hand at my back—a visual metaphor. Even now I feel she stands behind me, supports me, encourages me. 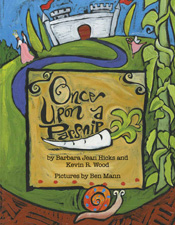 Tell us about your latest book, Once Upon a Parsnip?

A number of years ago I joined a children’s book writers’ group and met Kevin Wood—a man who is off-the-charts, in my opinion, when it comes to creativity. One day he brought a grocery list to the meeting–of items you might find in a fairytale grocery store, like poison apples, magic beans and pumpkins that turn into carriages. It was written in rhyme. He basically asked me if I could help him come up with characters and a plot to be used as a delivery system for his grocery list!

The Fairytale Grocery Store gained characters and a plot in a Little Red/Wolf rematch, with cameo appearances by the Three Pigs and other various fairytale folk. We had a publisher interested at one point, but it didn’t go anywhere. I continued to work on the story off and on; I’m a dog with a bone when it comes to a good story—if I think it has potential, I just don’t give up on it. Somewhere during that time, the title became Once Upon a Parsnip and parsnips were added to the plot.

Fast forward a dozen years…. I was doing a promotion for A Sister More Like Me at our local movie theatre the weekend Frozen was released. Ben Mann introduced himself as a local artist; we had a lovely chat and later developed a friendship. Meanwhile, I had met a group of “author-entrepreneurs,” women who had all published books independently, and I felt an immediate affinity with them. (I call them my “tribe”!) I had several manuscripts out to agents and editors but was getting no response, so I asked Ben if he might be interested in illustrating a book and self-publishing it with me. The timing was right. It was something he had wanted to do, and he felt our partnership and the manuscript were both a good fit. We met about every two weeks over the next six months, and I gave him feedback based on the things I’d learned paying attention to the editors and art directors on my previous books.

Six months after Ben finished the illustrations, we had Once Upon a Parsnip in hand. It was very exciting to open that first box of books! I had published a total of 20 books through traditional publishers, but this one felt different. For one thing, I loved acting as art director for the project. I pretty much let Ben do what he wanted to with the art, but I had a few suggestions about the relationship between the text and the illustrations in places, and he took them to heart. Later, I worked with the graphic designer at our publisher, Mascot Books, until we achieved the vision I had in my mind. I saw the art direction as another expression of my creativity, and I am so, so pleased with the look, color and movement of the text on the page and how it integrates with the artwork.

I also learned that I love the collaborative process. I have been fortunate to have had several amazing artists assigned to my previous books, but I wasn’t lucky enough to have actually worked with any of them. It was such a pleasure working with Kevin on the manuscript, with Ben on the illustrations and with the staff at Mascot Books on the editing and graphic design. I was very pleased when Kevin, who teaches English Language Learners in an elementary school, wrote a short easy reader about our three-way collaboration. Parsnip Partnership is designed for teachers to use in the classroom alongside Once Upon a Parsnip. Kevin has graciously given permission to other teachers (and parents!) to download and print this unique teaching guide.

And if you could be any fairytale character, who would you be? Why?

I’d like to be a fairy-godmother-at-large. Wouldn’t it be great to be able to right the wrongs of the world with the wave of a magic wand? I know what I’d do—I’d use my magic to make sure that every child everywhere had a chance to be a child–to laugh, to play, to imagine, to see light and beauty in the world. To feel safe. To be loved without reservation. In the meantime, I do what I can sans magic.