Nearly 200 people played away the day at the first-ever Pop-Up Adventure Play Day in Sacramento. Held at the Maple Neighborhood Center in south Sacramento, the effort was a collaboration between Fairytale Town and the Sacramento Play Coalition – and was months in the planning.

A call for materials—cardboard, PVC pipe, paint, shovels—was issued and volunteers were on site to accept donations 12 hours per week for a three-week period.

Planning meetings were held, and materials were sorted and cleaned.

General activities were selected. Outside were areas for digging and mud play, painting a large storage container, building with boxes and cardboard, tying up a string den, and creating with chalk art and clay. Inside activities included painting, drawing, assemblage, make believe, and music-making. 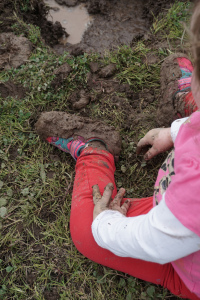 We were uncertain how the day would go. We thought it would be a good turn out if we had 20 people show up. We secretly hoped for 100.

People arrived as soon as we opened at 10 am. By the end of the day 75 children ages of 1 to 15, and at least that many adults came by. Children and adults alike got into the spirit of the event and had a great time.

A boy about 9-years-old dug a hole for the entire time he was there. By the time he was done, we could barely see the top of his head. Some of the play-workers got into the act and erected a shade structure for him. I’m still not certain how he got out of the hole. 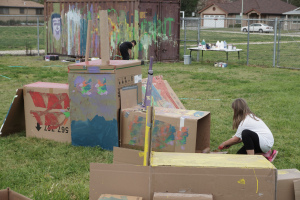 A 7-year-old boy spent his time turning cardboard boxes into a helicopter—again with the help of a play-worker.

It didn’t take long for the activity areas to spill into each other. The drums created inside soon made their way out. A group of girls dragged cardboard and tools inside to build their own living room… complete with a floor, walls, window, artwork, a couch and a flat screen TV—the only nod to technology for the whole day.

Nearly everyone spent time painting the large storage container. Some were able to spray the sides with a paint-filled water pistol.

A few people came by just to donate more items, and loved the interaction they were seeing.

While sore and tired, all of us involved were delighted with the results and are already planning the next event. We are looking to do another on a Saturday or Sunday in May. Fairytale Town and the Sacramento Play Coalition invite involvement from community members.

Pop-Up Adventure Play days are ‘soft’ openings of a permanent Adventure Playground that Fairytale Town plans to open at Maple Neighborhood Center later this year. Geared towards children ages 7 to 15, the Adventure Playground will be open during out-of-school times and will offer supervised play activities. Children will have the opportunity to work with real tools to create their own space for play. 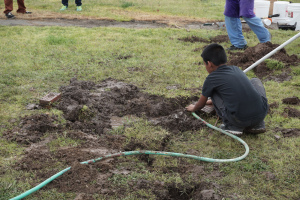 Adventure playgrounds harken back to the end of WW2 when European landscape architects and playground designers discovered that children enjoyed playing in the war rubble more than they did in pre-fab playground structures. They observed that children were more engaged in play in spaces they created themselves and thought that these non-traditional environments inspired imaginative, collaborative and thoughtful play, and helped build competencies for adulthood.

The Adventure Playground Fairytale Town is planning at Maple will build upon this model, offering open-ended play for children ages 7 to 15 during out-of-school times. A Kickstarter campaign to raise $5,000 for the Playground will begin in April. The Adventure Playground will also be part of the focus of Fairytale Town’s efforts for the Big Day of Giving on May 3. We hope for a lot of community support! As all who participated told us, we want more adventure play!

The Sacramento Play Coalition is comprised of play professionals and enthusiasts who meet bimonthly to be a clearinghouse of ideas and to share best practices. If interested in being part of the coalition or the next Pop-Up Play Day, please send a request to join our Facebook group. 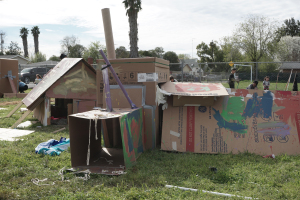 The Maple Neighborhood Center, located on the former site of Maple Elementary School, is a hub of health services, programs and opportunities for children and families presented by La Familia Family Counseling Center, 916 Ink, Fairytale Town and more nonprofit partners.

More information on Fairytale Town and its programs and services can be found at www.fairytaletown.org.