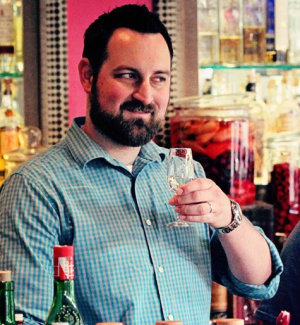 We are fortunate to have Brad Peters of Hock Farm Craft & Provisions serve as the Honorary Chair of Mad Hatter Meets Sherlock Holmes on May 8!

With over 13 years of experience in the hospitality industry, seven of those behind the bar, it’s Brad’s enthusiastic and genuine approach to mixing drinks and guest service that have earned him recognition as one of Sacramento’s most respected bartenders. Brad emphasizes ingredient-driven classic cocktails, often re-imagined with local produce and locally produced goods. Brad has received recognition for his recipes and perspectives in local, regional, and national media outlets.

We wanted to introduce Brad and ask him about a few of his favorite things and what he’ll be making for the party.

What’s your favorite: Alice in Wonderland, Sherlock Holmes, or both? Why?

I am a Sherlock Holmes guy. I love crime dramas, mystery and suspense. However, I guess when you look at it that way Alice in Wonderland is a lot of the same and I love the undertones of Alice. I’ll still stand by Sherlock.

If you could be any character from Alice in Wonderland or Sherlock Holmes, who would you be? Why?

Watson. He’s the trustworthy sidekick to the eccentric Holmes. All the excitement but none of the hassles of fame.

Have you been to Fairytale Town? If so, what is your favorite feature?

I have, multiple times. I love the venue for adult fundraising fun. I’ve been for concerts. I have a 7 month old boy now, and I’m sure I will be hanging around Fairytale Town a bunch soon.

What will you be showcasing at the Mad Hatter Meets Sherlock Holmes event on May 8?

We will be sampling Hock Farm’s sangria and demonstrating how to make a traditional punch. We will also be showcasing some fun methods to improve your at-home punch making experience!!!